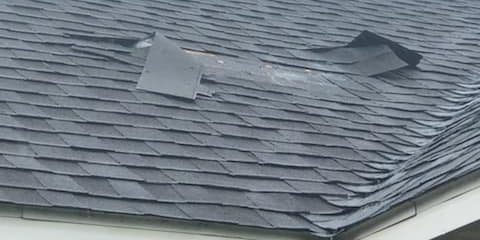 After Hurricane Sally, we had several areas of shingles missing on our roof. We knew there was damage due to water spots on the ceiling during the storm. As a “responsible” homeowner, I had made sure to purchase wind insurance for our home so I thought the roof repair process would be similar to a car insurance claim, boy was I wrong.

I called our insurance agent. Due to the massive loss of power and cable lines, the internet was down and cell phone service was not working well. My agent completed the form for us to start the claim process. Then, I waited to be called by the team that handles the wind claims.

After several hours, I received a call from the claims center and was given an adjuster’s name and phone number. They said if I did not hear from him in 48 hours to call him. With a vulnerable roof and rains coming in a few days, that started to make us nervous. I was told the claims adjuster would tarp the roof, so we waited.

24 hours later, I decided not to wait any longer. I called the adjuster. He said he was in Louisana and would not be in town for another 4 days and that he would call me when he returns to schedule a visit. Long story short, he does not do tarps and the visit to appraise the damage would not be until 10 days after the storm. This is when I started to read my insurance policy. Yes, I should have read it sooner, MUCH Much Sooner. It turns out we have a $9,900 Wind Deductible. Shock, nausea, and panic set in. Why didn’t I know how high my deductible was? Why didn’t I read this sooner, like before agreeing to the policy? This “responsible” homeowner is feeling pretty dumb at this point.

After several coping mechanisms [aka chocolate] and a few hours of staring blindly across the room, I decided to call my friend Jason at Tri-State Roofing. He had seen my roof pics on Facebook and gave me a rough figure of what it would cost to repair my roof, which as it turns out is significantly less than my $9,900 deductible. Because I live in lower Alabama and Jason is in TN, I called a local roofer to come tarp the roof and give me an estimate. They came out the next day and had the tarps up just as the rain began to fall, literally!

Now 2 weeks later, we are happily waiting on the repair with our tarps in place. Once the roof work is done, my husband will take care of the water spots on the ceiling. How much does the roof repair cost? Roughly, 10% of our deductible.

We are also the proud owners of a brand new generator that we purchased after we were out of power for several days. Luckily we were able to plug into the neighbor’s generator until we got ours so we did not lose a refrigerator and second freezer full of food. The power was out for a week and a simple fan made a huge difference in our comfort level. Plus, we had ice! Many friends and family were not as lucky.

What did I learn?
1. Buy wind insurance from a company with good customer service
2. Make sure you can afford the deductible you choose, ie, do you have access to that much money?
3. Don’t wait for the insurance company, call a roofer to put tarps on asap.
4. Be sure to file a claim with home insurance if you plan to file for assistance with FEMA
5. Buy a generator so you do not lose all your refrigerated food.

What’s next for us, shopping for new wind insurance that we can actually afford to use if the time comes.

JASON MAZZANTI Jason enjoys spending time with his family, he also enjoys hunting, fishing and traveling. His peers know him for his hard work, dependability, and sense of humor. He is a member of the American Spirit Foundation that serves underprivileged children and is active in his Church community. Learn more about Jason here https://nashvilleroofer.com/about/

Pros and Cons of Felt versus Synthetic Roofing Underlayment
May 18, 2021